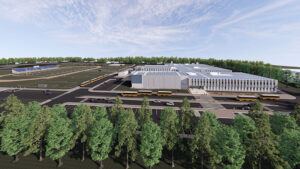 Now the Warwick School Committee is hopeful that not one but two new high schools will be built in the near future.

On Tuesday Katie Kernizan, from Saam Architecture gave the School Committee and the public a chance to look at proposed designs.

But first, School Committee Vice Chair David Testa, who serves as the Chair of the Building Committee, outlined the road traveled to get to this point.

Testa said that two and a half years ago the School Department and the City began the process of looking into making renovations to both Pilgrim and Toll Gate High School. He said that the process consisted of many meetings and community forums.

When COVID hit he said that progress stalled until 2021 when it resumed again.

In July 2021, the design team brought the first rendition of the renovation concepts to the Rhode Island Department of Education for their feedback.

Testa said RIDE was concerned education would be negatively impacted and students would lose during the four years it would take to complete renovations.

It meant going back to the drawing board and on Sept. 15 stage 1 of the process was presented to RIDE and was approved. The stage 2 submission is due Feb. 15.

“They have enthusiastically endorsed our direction,” said Testa.

Testa said that both schools are expected to be similar and career and tech would be integral in both of the schools.

“The model school will be similar for both Pilgrim and Toll Gate with differences to give both equity and individual school identity,” said Testa.

Kernizan said that the proposal is for Pilgrim to be sited to the east which borders the adjacent commercial complex which includes the Pilgrim Senior Center.

The plan for parking is for it to be set back from Pilgrim Parkway “establishing a generous landscape buffer between the neighborhood as well as bioretention zone and acoustical barrier.”

Toll Gate, Kernizan said, will be oriented on the “high elevation,” of the Toll Gate site with the stadium being located on the low site.

As for the interior, the schools would be oriented to the middle of the school which would be called the “boulevard,” said Kernizan.

Kernizan said that the boulevard would serve as a circulation space as well as have a learning commons and dining area.

“We see the boulevard as an active public space with visual and physical connections to adjacent programs and the outdoors,” said Kernizan.

In addition, Kernizan said the schools are designed to have a vertical rock climbing walls because the gyms would be on two floors.

Following the presentation, Testa said he was enthusiastic about the progress being made.

“I can’t tell you how excited I am, hopeful I am that the community shares my optimism, my hope for this,” said Testa.

Committee member Karen Bachus said that she was disappointed RIDE didn’t inform the School Committee earlier in the process that they wouldn’t support their plan of renovating the two schools.

“We spent millions of dollars over the course of this process,” said Bachus.

In a letter to Mayor Frank Picozzi and City Council President Steve McAllister, Testa, along with School Committee Chair Judy Cobden and Supt. Lynn Dambruch requested to present to the City Council.

“As you know, the project for two new high schools is proceeding at a very good pace. Our Stage I proposal to RIDE has been approved and our next step is to submit our Stage Il proposal,” the letter reads. “The deadline for that submission is February 15, 2022. Within the Stage Il application, we are required to provide evidence that the School Committee, the Building Committee and the Warwick City Council support the submitted plan.”

“To that end, the School Committee and the Building Committee will meet in January to vote on resolutions in support of the project. Our need is to have the City Council consider a resolution of support in order for us to include it within our application documents to meet the February 15th submission deadline,” the letter went on to read. “Therefore, we are respectfully requesting that the project presentation be placed on the docket for your Feb 7, 2022 City Council meeting for consideration and a vote.”

While the costs associated with the two schools are unknown right now, the School Committee expects to know by the Council meeting.

“The School Committee and the Building Committee are ready and willing to meet with City leadership anytime after the final cost projections are completed by the project’s architects and engineers. We expect these to be completed on or about January 24th,” the letter read. “We will be prepared to meet with any members of city leadership that you deem necessary as our intention is to be as transparent as possible and allow you time to digest all of the information within and among your respective constituencies before the City Council meeting. Additionally, we are also ready to present a public presentation of the plan if you deem it worthwhile as well.”

READ THIS ARTICLE BY ALEX MALM IN THE WARWICK BEACON