Diana Ostberg is Interviewed by the Boston Business Journal 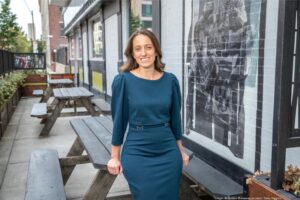 Diana Ostberg grew up in Central Massachusetts in a family of contractors. Being around that business, and having an aptitude for science and math, led her to decide she’d be an architect by fifth grade.

Today, she likes all kinds of projects — residential, commercial, institutional — but thrives with clients who are collaborative. She also volunteers in her town and for Cradles to Crayons, where her kids also volunteered before the pandemic.

She said the key to keeping her work interesting is to work on a variety of buildings.

She started out in the Boston office of a large firm which was later purchased by Stantec. When two of her co-workers left to start saam architecture in 2014, she went along. Today, she’s the CEO but remains active as an architect, splitting her time roughly evenly between the two roles.

“I have three or four active projects that I’m the project manager right now, so I’m managing a team within the office but also talking to the clients, coordinating, with the consultants, the different engineers and people that work under us as the architect,” she said. “It’s a lot of switching between things like that, but in the same way, working on a lot of different project types appeals to me in the sense of, it’s always new, it’s always different, it’s always fresh.”

That sort of multitasking comes natural to the mother of four. Not only is the company female-owned and run, 20 of the 23 employees are women, a fact she is proud of in such a male-dominated field. She attributes the gender split to the flexible schedule they’ve given employees and benefits like working from home and unlimited vacation time.

“We believe in hiring trustworthy, capable people and treating them like adults,” she said. “And we’ve found that they respond and do amazing work for us. Several people who are working for us might not still be in the workforce at all if they were forced to go to a more traditional firm where you have to be in your desk from 9 to 5 every day.”

Ostberg said being a woman-owned business gives her firm an advantage in securing some government contracts that are set-aside for minority-owned businesses. Still, she is a strong advocate encouraging more women to enter the field, stay in it and eventually take on leadership roles.

“Architecture suffers from the same issues as many other professions in terms of women’s advancement,” she said. “Architecture schools are putting out an equal amount of women graduates, if not a few more women graduates, but it doesn’t seem to be sticking. We’re losing a lot of women mid-career when they’re having families and all those things. So we’ve got some work to do.”

READ THIS ARTICLE BY JIM MORRISON ON THE BOSTON BUSINESS JOURNAL