Diana Nicklaus Weighs in with The Wall Street Journal 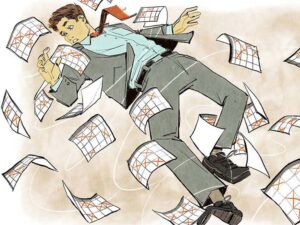 How many times can you reschedule a meeting?

The consensus among a dozen professionals and managers I interviewed: Three strikes and you’re out.

“By the third time I start to get suspicious: This is a brushoff,” says Jennifer Pinck, president of a real estate advisory and project-management company in Boston. “You may ascribe it to nefarious intent, but you don’t really know.” So she always gives a gracious reply: “Look, it sounds like you’re really busy. I’m still very interested in meeting with you. Let me know when you have time.”

People often book a meeting, coffee or lunch date with good intentions, but end up canceling and rescheduling—endlessly.

Richie Frieman was fuming last fall when a client canceled a coffee date at the last minute via text message. Mr. Frieman, who had driven an hour from his Baltimore office to Washington, D.C., to discuss a speaking engagement with the executive, slammed his laptop shut, thinking, “This is ridiculous. I’m looking at another hour driving back and I’ve wasted an entire morning,” he says.

By the time the executive canceled a second coffee on short notice, citing heavy traffic, Mr. Frieman was in a rage. “I was like, you gotta be kidding me! We have Waze, Google Maps—couldn’t you have figured out travel times in advance?” When the executive rescheduled a third time, they finally met, but at a restaurant conveniently near Mr. Frieman’s office. “You have to know when you throw somebody overboard twice, you’re in the hot seat,” says Mr. Frieman, a speaker, illustrator and author. “Guilt is a powerful tool.”

Serial reschedulers can do serious damage to their reputation, says Karen Kaufman, a Philadelphia impression-management coach. “You might wonder, do they have the maturity to handle their schedule?” Or maybe they have trouble saying no, or weren’t clear on why they were getting together in the first place, she says.

Dawn Fay had every intention of helping an out-of-work acquaintance who asked to meet with her last year for lunch and career advice. When the woman canceled and rescheduled the first time, Ms. Fay downsized the meeting to breakfast. When the woman wanted to reschedule a second time, Ms. Fay offered to book a phone call. “I understand things happen, but to me, this individual seemed disorganized and not respectful of people’s time,” says Ms. Fay, a district president in New York for the staffing firm Robert Half International.

The woman said she needed a face-to-face conversation, so Ms. Fay met her over coffee for 20 minutes, but she withheld several business contacts she’d originally planned to give her. “I didn’t want them going through what I was going through,” she says.

There are ways to keep the people you’re canceling from feeling slighted: Apologize and show enthusiasm for both the meeting and the person, Ms. Kaufman says.

It isn’t always wise to give detailed reasons for a postponement if it makes obvious that the person you’re rescheduling isn’t your highest priority, says Jodi R.R. Smith, a Marblehead, Mass., etiquette consultant and author.

But giving specifics can lend credibility when you haven’t any choice but to cancel. When Lily Herman, a New York writer and editor, had to reschedule numerous meetings recently after injuring her foot, she told her contacts, “Hey, I’m not avoiding you, I literally have a broken bone in my toe and I can’t walk,” she says.

Diana Nicklaus, a principal at Saam Architecture in Boston, tries to provide choices for the person she’s rescheduling, naming open dates and suggesting, “We can meet before the workday, after the workday, or do something more informal, such as changing the meeting from lunch to coffee,” she says.

Some executives give the cancelee the gift of more time. Brett Caine, CEO of Urban Airship, a Portland, Ore., digital-marketing company, recalls planning to meet with a software-company CEO who had to reschedule the meeting at the last minute. When they eventually met, the CEO apologized and told him, “Take all the time you need to ask me all the questions you want,” Mr. Caine says. “That made a lasting impression.”

When Cheryl Heisler reschedules meetings more than once, “it’s often because I shouldn’t have made that meeting in the first place,” she says. She agreed last year to meet with a financial advisor an acquaintance had referred to her, despite doubts about the value of the meeting for her. She wound up rescheduling three times, says Ms. Heisler, president of a career-consulting service in Chicago for lawyers and professionals.

She felt so bad that when they finally got together that she let the advisor choose the location. Her fears were confirmed: “This person just wanted to pick my network clean” and had little to offer in return, Ms. Heisler says. She still picked up the tab.

READ THIS ARTICLE BY SUE SHELLENBARGER IN THE WALL STREET JOURNAL

Ride along with us on the East Bay Bike Path! The

Saam Vice President and COO Diana Ostberg will be

We were excited to attend yesterday’s Barnes Air

The Saam team had a great time at our September qu